The Nuts and Bolts of Targeted Temperature Management 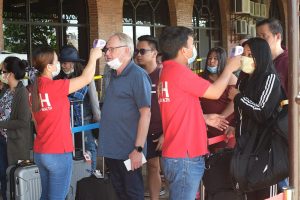 As a result, TTM has become the standard of care for this patient population.4 This article serves to follow up the previous article in this journal by providing further details regarding the current protocol for TTM, divided into the phases of induction, maintenance, and rewarming.

Decisions about initiating therapeutic hypothermia begin before the patient even arrives at the hospital. A common adage in stroke physiology says that “time is brain.” Does the same principle apply to post-cardiac arrest patients who may benefit from early initiation of TTM? An article published in the Journal of the American Medical Association (JAMA) in 2014 details a randomized clinical trial which assessed the survival and neurological outcomes of patients who had TTM initiated in the prehospital (Emergency Medical Services) setting versus the in-hospital setting.5 The results showed no difference in mortality between the two groups, and even demonstrated an increased incidence of repeated cardiac arrest and pulmonary edema in the early-initiation group. As a result, the American Heart Association (AHA) has issued a strong recommendation against the early cooling intervention for post-cardiac arrest patients requiring therapeutic hypothermia.6

Then there is the question of how the patient should be cooled. The major considerations include the speed at which a target temperature can be attained, the reliability with which that target temperature can be maintained, and the ability to rewarm in a controlled fashion. In the absence of strong evidence in favor of any particular cooling modality, these decisions are largely guided by considering the practicality and risk of complications associated with any given method. For example, one low-tech, low-cost method for induction of hypothermia is full body ice-water immersion, which can rapidly lower the core temperature. However, this technique cannot precisely target a hypothermic temperature. Moreover, it is impractical in most ICU settings. Another technique infuses cool saline through catheters placed in the femoral, subclavian, or internal jugular veins to lower the core temperature. This method can lower the body temperature relatively quickly (though not as quickly as full body ice-water immersion) and in a controlled fashion such that a temperature target can be precisely maintained. Some manufacturers of these catheters have installed built-in temperature sensors that allow for dynamic temperature adjustment. The downside of intravascular catheters is that it is an invasive procedure requiring an expert for placement, which delays the induction of hypothermia upon arrival to the hospital. In addition, indwelling catheters are prone to thrombosis, a complication of TTM that has been previously reported in the literature.7 The TTM protocol at NYU Langone Health uses skin surface cooling in the form of hydrogel-coated water circulation pads.8 The advantages of this cooling technique include its relatively rapid rate of cooling, and precision in attaining, maintaining, and rewarming from a target hypothermic temperature. A major advantage of this technique is the user-friendliness of the system, which allows TTM to be initiated almost entirely by nursing protocol without being delayed by physician or interventionalist clearances. As a result, cooling can start much more quickly than a catheter-based approach. As with any surface cooling technique, there is a risk of skin damage, but this complication has been seen only rarely in the literature.

After a decision has been made as to how to cool the body, one has to then decide how much to cool the body–how low do you go? The landmark studies done in 2002 that first demonstrated the benefits of therapeutic hypothermia cooled patients to about 33 degrees Celsius (91.4 degrees Fahrenheit). However, at that time, no studies had been undertaken to determine why that particular temperature had been chosen.

A 2013 randomized clinical trial by Nielsen and colleagues published assigned TTM patients to be cooled to either 33 degrees or 36 degrees Celsius (91.4 degrees or 96.8 degrees Fahrenheit).9 The study showed no significant difference between the two cohorts in terms of mortality or recovery of neurological status, and the rate of complications was similar in the two groups as well. Because the study did not provide evidence in favor of either temperature target, the AHA guideline ambiguously recommends cooling to a targeted temperature somewhere between 32 and 36 degrees Celsius (89.6 degrees and 96.8 degrees Fahrenheit). The greater significance of this finding may have been to demonstrate that colder may not necessarily be better in terms of outcomes, and that the benefits of therapeutic hypothermia may be more attributable to the prevention of hyperthermia than the degree of hypothermia.10

The results of the Nielsen study stirred controversy in the field of TTM. One of the major critiques of the study was that the heterogeneity of both the patients and the protocols used to achieve a target temperature may have compromised the results.11 As mentioned previously, there are a variety of methods for initiating TTM. The study in question collected data from 25 ICUs, each with their own protocol for TTM. Another consequence of the study was an apparent reduction in the use of TTM altogether following its publication.12,13 Because the noninferior setpoint of 36 degrees is close to the normothermic value of 37, it is possible that some physicians viewed the study as a justification for abandoning TTM in order to spare patients its potential adverse effects. However, many ICU clinicians continue to advocate the use of TTM at lower temperatures, as recent studies such as HYPERION have since demonstrated a neuroprotective benefit, at least in a subset of these cardiac-arrest patients.14

Once a patient’s body has been cooled to the target temperature, it becomes vulnerable to a host of hypothermia-related side effects such as hypovolemia and hypotension, electrolyte abnormalities, shivering, and increased infection risk.7 In particular, shivering poses an interesting challenge to the induction of hypothermia, as it is one of the many physiologic counter-regulatory mechanisms that the body uses to combat hypothermia, iatrogenic or otherwise. The problem is that by increasing the metabolic rate, shivering delays the induction of cooling towards the target temperature.15 This problem is typically combated with a combination of sedatives and paralytics, but the selection of these agents is debated, in the face of limited evidence and guidelines.

Infections also poses a challenge during TTM, as the body’s immune system is suppressed in hypothermic conditions.16 Not only is the body potentially more prone to infection during this period, but the typical symptoms such as fever and malaise cannot be assessed in a patient who is hypothermic and comatose (or at the very least, heavily sedated). One way of assessing the body’s metabolic rate is to periodically assess the cooling temperatures required for a device to maintain a target temperature in the post-cardiac arrest patient. A new requirement of colder water temperatures to maintain the same target temperature indicates a change in the body’s metabolic rate, possibly caused by the body’s attempt to fight an occult infection. In this situation, empiric antibiotic treatment may help reduce the incidence of infection in these patients.17

TTM in Other Patient Populations

Given the adoption of TTM for post-cardiac arrest care in adults, its use has been attempted in other patient populations, with mixed success. For example, as is the case with adults, hyperthermia following cardiac arrest is associated with negative outcomes in children. Similar to the results of the 2013 “33 vs. 36” Nielsen NEJM study, the major study in pediatrics by Moler and colleagues did not reveal a significant difference between therapeutic hypothermia at 33 degrees versus therapeutic normothermia at 36.8 degrees.19 TTM has also been attempted as a means to control intracranial hypertension after traumatic brain injury, but this study did not find a difference between hypothermia versus standard care.20 Similar attempts to manage status epilepticus with TTM have also been unsuccessful.21 We are left to conclude that, while TTM appears to be an appealing treatment from a pathophysiological standpoint, clinicians must continue to rely on well-done studies to guide neuroprotection for any given pathology.

These three phases–induction, maintenance, and rewarming–form the basis of targeted temperature management. There are still several unanswered questions that require further investigation and research in order to determine the best practices in this field.6