QT interval prolongation is a common side effect shared among the most effective antiemetic classes. The risk of QT prolongation is exacerbated by electrolyte abnormalities observed in patients with ongoing emesis, particularly hypokalemia. While QT prolongation in itself is not harmful, it increases the risk for developing a polymorphic ventricular arrhythmia aptly named torsades de pointes (TdP), French for “twisting of the points”, because of its appearance of a twisting ribbon around the electrocardiogram (ECG) baseline. TdP can rapidly degenerate into ventricular fibrillation and cardiac arrest.

Numerous antiemetics are available to practitioners and differ in both the receptors they target and side effect profiles. Table 1 presents a list of commonly used antiemetics, their class, mechanism of action, side effects, and effect on the QT interval.

Antihistamines are used primarily in the management of pruritus and allergic reactions. However, they can also be used to treat motion sickness-associated nausea. The antiemetic effect is via H1-histamine receptor antagonism within the area postrema (1). The use of antihistamines is limited by anticholinergic side effects including sedation, dizziness, and blurry vision. The mechanism by which antihistamines prolong QTc is inhibition of the delayed rectifier potassium current (IKr), a potassium efflux channel, resulting in prolonged cardiomyocyte repolarization (2).

Phenothiazines, butyrophenones, and benzamides are all antiemetic classes that function primarily by inhibiting dopamine receptors within the area postrema. Although they provide powerful symptom relief, their use is limited by both extrapyramidal side effects and QTc prolongation. Metoclopramide is a commonly used benzamide, which crosses the blood-brain barrier and inhibits dopamine receptors within the basal ganglia. Due to dopamine blockade, adverse reactions include dystonia, akathisia, and tardive dyskinesia (3). Although dystonia can be relieved with the administration of antihistamines, tardive dyskinesia is a permanent and disabling side effect. Metoclopramide carries a black box warning from the FDA regarding the risk of tardive dyskinesia with long-term use (4). To address the side-effects of metoclopramide, domperidone was developed as a peripherally-acting dopamine antagonist that is unable to cross the blood-brain barrier. However, its use is restricted and requires special approval via the FDA investigational drug protocol. The exact mechanism by which benzamides induce QTc prolongation is uncertain, but recent studies suggest they block cardiac voltage-gated sodium channels, which may serve to explain some of their cardiotoxic effects (5). Both phenothiazines and butyrophenones are known to cause QTc prolongation because of their inhibition of IKr potassium efflux channels and are similarly limited by extrapyramidal side effects (2, 6). Newer generations of butyrophenones, such as olanzapine, have demonstrated lower risks of cardiotoxicity and extrapyramidal side effects, however, their degree of antiemetic efficacy remains to be elucidated.

Antiemetics That Do Not Cause QTc Prolongation

Hospitalized patients are at risk for acquired QTc prolongation in the setting of medication administration and electrolyte abnormalities. Therefore, clinicians should be familiar with antiemetic classes that can be safely used in patients who have an established prolonged QTc.

Scopolamine is an antimuscarinic mediation with a similar anticholinergic side effect profile as antihistamines. However, by acting as an M1-muscarinic antagonist, it is non-sedating and does not prolong the QTc. Its use is limited to motion sickness prophylaxis and it is only available as a transdermal patch (10).

Benzodiazepines, specifically lorazepam and alprazolam, can be used to treat acute nausea in the inpatient setting.  However, the degree of symptom relief is minimal, and their use is limited by sedation, anterograde amnesia, concerns for addiction, and risk of delirium in the elderly (11, 12). Their effect as an antiemetic is more likely related to anxiolysis and mitigation of anticipatory emesis rather than a direct effect on the area postrema (13).

Glucocorticoids, particularly dexamethasone, has well-established antiemetic properties and is used to treat chemotherapy-induced vomiting (14). The mechanism by which glucocorticoids treat nausea and vomiting is unclear. Furthermore, their use is limited by numerous adverse effects including adrenal suppression, infection, hyperglycemia, myopathy, and osteopenia (15). The risks and benefits of glucocorticoid administration should be carefully weighed before being used to treat nausea and emesis in patients with a prolonged QTc.

Numerous treatment options are available for the management of nausea and vomiting. Recognizing which antiemetics can be safely used and their side effect profiles is crucial for effective patient care. 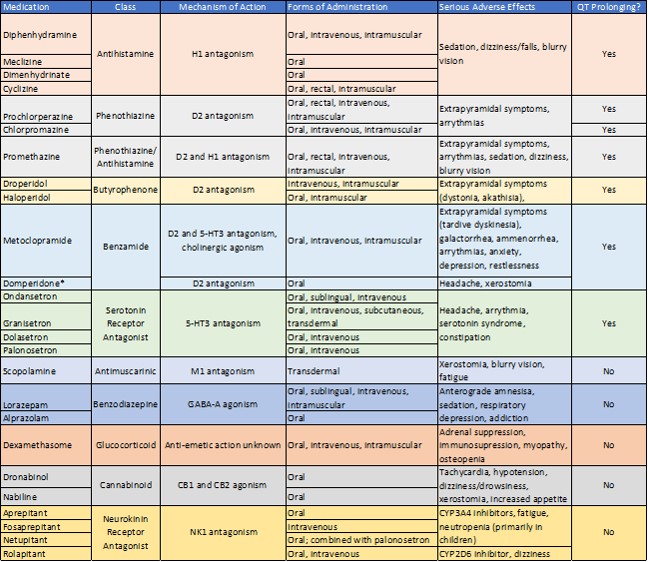 *Only available through the FDA’s investigational drug protocol