A Bad Break for the Purple Pill… 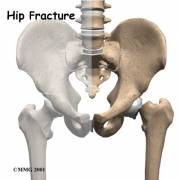 In the December 27th 2006 issue of JAMA, Yang et al. reported the results of a nested case-control study of United Kingdom patients entitled “Long-term Proton Pump Inhibitor Therapy and Risk of Hip Fracture.” Using the General Practice Research Database (GPRD), a computerized medical record system used by several of the general medical practices in the UK, new hip fracture cases were found in patients at least 50 years old (n=13,556) and matched them with up to 10 age and sex matched controls (n=135,386). The primary exposure of interest was proton pump inhibitor (PPI) therapy of more than 1 year prior to their hip fracture.

The results of the study were impressive. The crude incidence rate of hip fracture was estimated to be 4.0/1000 person-years among patients with more than 1 year of PPI therapy and 1.8/1000 person-years among acid-suppression non-users. Controlling for matching variables with known associations, osteoporosis or the risk of falling, the odds ratio for hip fracture in the PPI group was 1.82 (p<.001) while the multivariable adjusted OR for all the potential confounders was 1.44 (p<.001). Of note, the corresponding adjusted odds ratio for H2 Receptor Antagonist use was 1.23 (p<.001). When the PPI only users were compared to acid-suppression non-users (eliminating H2 receptor antagonist users), the adjusted odds ratio was 1.62 (p<.001). Additionally, the duration of use was associated with fracture risk in a nonlinear fashion, implying that the longer one used PPIs, the fracture risk increased exponentially. Most important in an article about harm, a significant dose-response effect was observed, meaning that higher dose PPI therapy was associated with higher risk of fracture. This supports the argument that the PPI is the cause and not an coinicidental finding. Lastly, the risk was found to be stronger in men than in women.

While it is unclear from this study as to why PPIs and to a lesser extent H2 receptor antagonists increase one’s risk of hip fracture, the authors hypothesize that this finding may be related to calcium malabsorption secondary to acid suppressive therapy. However, they also site a potential inhibition of the osteoclastic proton transport system by PPI’s which in theory could reduce bone resorption and be protective against fractures. They further hypothesize that the calcium malabsorption overhwlems this protective effect. Clearly the mechanism has not yet been worked out. Nevertheless, we are left with the clear possibility that long term use (>1 year) of PPI and/or H2RAs, particularly high dose, may increase one’s risk of hip fracture.

So how does this apply to us? Well just for a moment think about all the patients we admit during our ward months. How many of them are put on PPI for “gi prophylaxis” when it is not indicated? Then how many of them are discharged with a prescription for a proton pump inhibitor? Or how many patients show up in our clinics with a medication list that includes a PPI? Do you usually stop it or let it go because it’s a “benign drug?” Well this study shows that PPIs may not be such a benign drug and we should all be a little bit more careful about who we prescribe and/or keep on them, especially people at high risk for osteoporosis. Obviously the above study had some flaws. It was an observeration study as opposed to a randomized trial. It classified PPI users based on written prescriptions as opposed to actually asking if the patients used them, thus perhaps overestimating compiance. Calcium supplementation was not assessed. And there are others. But regardless, the large population and the dose response makes the data more robust and definitely sends a message: It’s a bad break for the purple pill.

2 comments on “A Bad Break for the Purple Pill…”