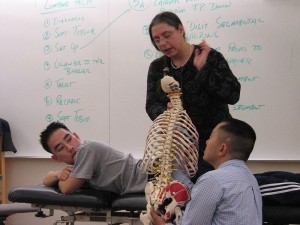 Empathy is an elusive concept, espoused by many as an integral component of effective doctoring. In the medical literature, empathy is defined as a physician’s ability to recognize and validate a patient’s experiences and perspectives,  and to convey this understanding back to the patient.[1] A firm distinction is drawn between sympathy (an emotional attribute) and empathy (a cognitive skill that can be modeled, taught, and assessed).[2]

The results are recognized by physicians-in-training across the country. During the traditional white coat ceremony, starry-eyed medical students pledge their devotion to relieving pain and suffering. Reminders of this commitment continue throughout school, with classes focused on the physician-patient relationship, and a variety of objective structured clinical examinations (OSCEs) grading students on their empathy skills.

So how is it possible that studies examining medical student empathy indicate that empathy scores decrease, rather than increase, during medical school?

Yes, that is correct. Despite the solemn oaths and noble aspirations, empathy diminishes during medical school. And, apparently, the decline is significant.

Researching this phenomenon was difficult without an empathy scale designed specifically for medical professionals.[5] Then, Dr. Mohammadreza Hojat developed the Jefferson Scale of Physician Empathy (JSPE), a 20-item questionnaire measuring components of empathy among physicians in patient-care settings. In this survey, respondents indicate their level of agreement with each item on a 7-point scale. The total score ranges from 20-140, with higher scores indicating a higher degree of empathy. There is also a student version of the scale (JSPE-S). Both scales have been validated in multiple settings; self-reported resident scores are consistent with both patient and residency-director assessment of clinical empathy.[6,7]

In 2007, the Jefferson scale was used to assess the empathy of students at the Boston University School of Medicine. Students in all four years received the JSPE-S at end-of-year student events. The results were staggering. A significant decrease in empathy score was noted, from 118.5 at the end of first year to 106.6 at the end of fourth year. As in previous studies, women outperformed men. Also, students interested in “people-oriented fields” (family medicine, internal medicine, pediatrics, obstetrics/gynecology, emergency medicine, and psychiatry) outperformed students interested in “technology-oriented fields” (anesthesiology, radiology, pathology, surgery, and surgical subspecialties). Most troubling was that the biggest decrease in empathy occurred after the third year of medical school, the first full year of clinical experience for students.[1] Similar trends were observed among students at the Jefferson School of Medicine. Here, empathy scores did not change during the first two years, but a striking decline occurred at the end of the third year and persisted until graduation.[8,9]

There was also an observed relationship between decreased empathy and student career choice. In the Jefferson School of Medicine study, students with the greatest drop in empathy often switched their preferences from people-oriented specialties to technology-oriented specialties. This trend was especially pronounced for female students; women choosing technology-based careers upon graduation were the ones with the most pronounced empathy declines of the entire female cohort.[9]

These results imply an important but uncomfortable question. Is working closely with patients in the third year actually making medical students less empathetic?

This is a disturbing thought for many of us.

No study directly explores this question, perhaps because of its disconcerting nature. Some respond by questioning the validity of the previous studies, claiming that the results are grossly exaggerated and that a subjective value such as empathy cannot be quantitatively measured.[10] Others acknowledge the problem, but blame external sources. One study at UMDNJ-New Jersey Medical School finds a correlation with high medical student burnout scores and low empathy. Another blames increasing time pressure, overreliance on technology, negative clinical experiences, and lack of role models.[2] It has been difficult to find a culprit, but this does not change that fact that something is amiss. The focus on empathy in the medical school curriculum is not translating into practice. Ironically, a JSPE-S study in Japan, a country that traditionally does not emphasize empathy in medical school, found that medical student empathy scores actually increase throughout medical education.[11]

So, let us address the next question we type-A personalities are dying to ask. How do we fix it? It seems that communication may be the key. A Spanish study looking at medical student empathy scores after participation in a 25-hour communication workshop noted a 5.25 empathy point increase, with increases in 68.9% of participants.[12] A unique project involving doctors who became patients stated that small changes such as “communicating directly about taboo topics and being more sensitive in discussing ‘bad news,’ adherence, and nonmedical concerns” can make a difference.[13] A study at the Robert Wood Johnson Medical School found that a longitudinal experience involving “blogging about clerkship experiences, debriefing after significant events, and discussing journal articles, fiction, and film” raised empathy scores.[14]

These studies imply that students do not lack empathy or lose it during medical school. Instead, what students struggle with most is the last part of the definition of empathy: the ability to communicate it to patients. This struggle seems to surface during the third year of medical school. Perhaps it is the fractured nature of clinical experience, or the competitive drive to appear impervious that is to blame. However, since empathy affects clinical outcomes just as much as prescribing the right medication, it is worth treating.  Research suggests the remedy may be for students to talk to each other about struggles with empathy. Only by improving communication skills can we really improve our clinical acumen.