Gout: A Disease of the Blessed or a Blessing in Disguise? 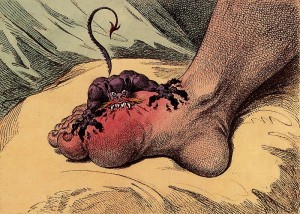 “The patient goes to bed and sleeps quietly until about two in the morning when he is awakened by a pain which usually seizes the great toe, but sometimes the heel, the calf of the leg or the ankle… so exquisitely painful as not to endure the weight of the clothes nor the shaking of the room from a person walking briskly therein.”

Gout, an excruciatingly painful but relatively benign form of arthritis in the modern world, has an intriguing pathology with ancient roots. Initially described by the Egyptians in 2640 BC, gout quickly gained its reputation as an “arthritis of the rich” in the writings of Hippocrates during the fifth century BC.[1,3] Six centuries later, Galen first recognized tophi, the crystalized monosodium urate deposits that result from chronic hyperuricemia, and further emphasized the growing link between gout, “debauchery,” and “intemperance.“[1,4] Throughout history, the early link between gout and an affluent lifestyle has been reinforced by the consistent association between this disease and the consumption of rich foods and excessive alcohol. Indeed, this is aptly summarized by a clever comment noted in the London Times in 1900: “The common cold is well named – but the gout seems instantly to raise the patient’s social status.”[1]

The heart of this historical association remains relevant in the modern world. Gout is characterized by chronic hyperuricemia that exceeds the physiologic saturation threshold of urate, at around 6.8 mg/dL.[5] At excessive levels, the monosodium salt of precipitated serum urate can form needle-like crystals that deposit into joints, triggering an acute inflammatory arthritis in certain individuals.[6] The number of individuals with this predilection is on the rise. The prevalence of gout in America has doubled in the past few decades and is rising rapidly in other countries with growing economies.[5] Indulgent features of a Western diet, including heavy consumption of meats, seafood, fructose-sweetened beverages, and beer have added significantly to the overproduction of uric acid in affected individuals. More importantly, cardiovascular disease, renal dysfunction, metabolic syndrome, hypertension, and the widespread use of thiazide and loop diuretics have led to decreased renal excretion of uric acid in hyperuricemic states. Together, overproduction and underexcretion have created a “perfect storm” [7] for worsening and difficult-to-treat gouty arthritis in the modern setting.

So gout continues its legacy as a disease of the affluent or the “blessed,” so to speak. There are also evolutionary reasons for the persistence of this ancient and painful pest.

Uric acid is a waste product resulting from the biologic oxidation of purines, including adenine and guanine–components of deoxyribonucleic acid (DNA), ribonucleic acid (RNA), and adenosine triphosphate (ATP).[8] Most microorganisms have the complete enzymatic profile needed to catabolize purines to their final degradation products ammonia and carbon dioxide. However, birds and reptiles have lost some intermediary enzymes required for this process. Notably, a mutation resulting in the loss of uricase occurred during the evolution of birds and uricotelic (urate-excreting) reptiles, possibly including Tyrannosaurus rex.[9] Thus, uric acid accumulates in these organisms. The survival advantage involves the large-scale excretion of nitrogenous wastes as insoluble uric acid–a method of maintaining nitrogen balance with minimal water loss.[8] Uricase reappears in most mammals, allowing for the conversion of uric acid to soluble allantoin that is subsequently excreted in the urine. Although humans also possess the gene for uricase, it is inactive,[10] forcing us to excrete relatively insoluble uric acid, with the potential for precipitation and crystal formation.

Is there a survival advantage for a hyperuricemic state in man? This question has recently received substantial scientific attention.

Programmed cell death, as seen in the context of infection, leads to increased purine catabolism and increased uric acid buildup. Recent evidence suggests that high concentrations of uric acid, specifically in crystalline form, serve as an adjuvant signal in addition to antigen presentation to major histocompatability complex molecules. This second signal is thought to stimulate dendritic cell maturation and transform a low-grade T-cell immune response into a fulminant response by confirming pathogen invasion in the context of cell damage.[11,12] Results from a related study validate these findings by demonstrating that tumor rejection in mice is enhanced by injecting crystalline uric acid into the mouse and suppressed by decreasing uric acid levels with uricase or allopurinol.[12] Indeed the potentially protective role of hyperuricemia, and by association gout, was already suggested in 1873 by the social and political writer Horace Walpole, who predicted that gout may prevent other illnesses and prolong life.[13]

In the same vein, it has been proposed that hyperuricemia may provide a selective advantage by acting as an antioxidant in the nervous system, liver, lungs, and arterial walls.[10] Uric acid is a powerful scavenger of the free radicals that can cause oxidative damage to tissues.[14] In the nervous system, treatment with uric acid is correlated with decreased Wellerian degeneration and thermal hyperalgesia after sciatic nerve injury.[10,15] In the liver, addition of uric acid prevents oxidative damage to hepatocytes in animal models of hemorrhagic shock.[10,16] High levels of uric acid and antioxidant have also been identified in tracheobronchial aspirates of mechanically ventilated premature infants, suggesting that uric acid may protect against oxidative lung damage early in life.[10,17] Finally, increased serum uric acid levels can also explain measured increases in antioxidant capacity in patients with significant atherosclerosis.[10,18]

In addition to its possible antioxidant features, hyperuricemia may have an evolutionary role in blood pressure maintenance in the context of bipedal, human locomotion–an evolutionary step that adds significant demands on cardiovascular function.[11] Evidence for this model comes from a recent finding that animals on low-sodium diets are able to maintain blood pressure only when a uricase inhibitor is introduced.[11,19] This is further reinforced by a study showing lowered blood pressure (to the normal range) in adolescents with essential hypertension when allopurinol, the current therapy for hyperuricemia and gout prophylaxis, is introduced.[11,20]

These findings add to the mounting evidence that hyperuricemia and its less pleasant partner, gout, may have survived natural selection for the various advantages they offer human life. The potential immunological, antioxidant, and hemodynamic roles of uric acid in human biophysiology are areas of growing research that offer insights into an ancient disease that has stood the test of time. With the rising incidence of gout in the context of worsening and refractory illness, understanding the mechanisms involved may be valuable in the design of future treatments. To both the healthcare and scientific community, gout remains a striking example of the subtle balance between health and disease, offering us a reminder that there is seldom any gain without at least a little pain.

In this very nice summary, the author points out the potential benefits of the higher uric acid levels that characterize purine metabolism in humans and other primates. As noted, humans—and primates and New World monkeys—suffer from an absence of uricase, the enzyme that converts uric acid to the more soluble allantoic acid. During the Miocene era (10-20 million years ago) evolution pounced on uricase with a vengeance, deleting it from primates multiple times. Surely there was a reason—or multiple reasons–for this selection.

That said, we must express our enthusiasm for high urate levels with some trepidation. For one thing, as a species we have moved on. The low-salt environment—and the need to stand up and not fall down from trees—that may once have selected for higher uric acid levels to help us maintain blood pressure has given way to a high-salt, high-purine environment in which we need no help from evolution to maintain our urate levels and blood pressures. On the contrary, our problems now are obesity and hypertension. (Interestingly, studies during the Depression suggest that less than a century ago–before McDonald’s and Pepsi–our average serum urate was closer to 3-4, rather than the current 5-6 mg/dL. That level of urate, rather than the current one, may have been the actual result of uricase inactivation.)

The antioxidant hypothesis—urate is the most potent small molecule antioxidant in plasma–is evolutionarily attractive, to the extent that humans and other primates, but not other mammals, lost the ability to synthesize the alternative antioxidant ascorbate only a few million years before we found a way to knock out uricase. Could this have been the evolutionary pressure that led us to raise our uric acid levels? The antioxidant effect of urate—well established in vitro—may indeed be important for the central nervous system, as clinical studies suggest that patients with neurodegenerative diseases (Parkinson disease, multiple sclerosis, Alzheimer disease) appear to do better when their urate levels are higher. (Studies are ongoing, and cause-and-effect has not been established). On the other hand, in the periphery this effect may be less important, since red blood cell membranes are abundant and seem to have ample antioxidant capacity even when urate levels are low. Moreover, the potential benefits of higher levels of urate need to be balanced against the potential liabilities; increasing evidence implicates high urate levels in hypertension, renal disease, heart disease, and maybe even diabetes and obesity. And finally we should note that patients who have the highest levels of serum urate—those susceptible to gout—may experience no additional benefits while suffering from their debilitating disease.

In a sense, hyperuricemia may be like an old, old friend, who has done much good for our family in the past, who still has a number of charming attributes, but who in other ways has visited too long, and whose virtues are now confounded by cranky bad behavior. As physicians we should learn from our “friend,” treat it respectfully, and seek through research to exploit hyperuricemia’s possible virtues while refusing to accept its lamentable vices.

One comment on “Gout: A Disease of the Blessed or a Blessing in Disguise?”