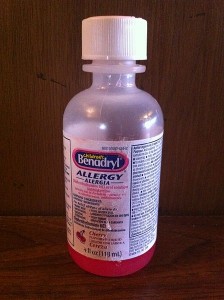 A few weeks ago I received an email from a friend I grew up with containing a link to an article she had seen online and a question as to its implications. The email was directed to me, the medical student, but was also sent to eight of our other closest friends. I clicked on the link and found a short article titled, “What drugs are known to cause memory loss?”[1] My friend’s particular concern was based on the article’s discussion of antihistamines. In her email she wrote about her chronic allergies, her frequent use of Benadryl and her new fear that she might be increasing her risk of memory loss and Alzheimer’s dementia. Before I could read on, there were a handful of response emails from our friends lamenting their own new fears after reading the article. I quickly hit reply-all and told my friends I would let them know what I thought once I read it.

I clicked on the link. The article appeared to be a short summary of the findings from a paper published in Neurology in 2010.[2] It discussed the classes of anticholinergic medication that have been shown to cause memory loss in people of all ages and those that particularly affect the elderly.[1] Further down the article states that medications like Benadryl and Vistaril are examples of antihistamines that may cause memory loss.[1] I scrolled to the bottom to look through the article’s references for a link to the study in Neurology, but the article was not cited. I instead clicked a promising link which led me to another medical website with a bit more information. Like the first article, the second web page also summarized the findings of the Neurology article however, here it clarified that the study of interest was done in elderly African-Americans on the long-term effects of common anticholinergic drugs.[3]

A vital piece of information was now clearer to me – my 24-year-old friend had read a summary article about medications causing memory loss and applied them to herself based on a study on elderly African Americans: a different patient population. Both my feelings of obligation to my friends’, as well as my own curiosity, made me continue searching. Again I scrolled down for references or a link to the original study, yet the article contained neither. Begrudgingly, I went to PubMed through my school’s library website. A basic search with a few key words turned up zero articles. Eight different permutations in the advanced search still did not return the correct article. I returned to my school’s library website, searched for the Neurology publication and went through its archives based on the publication date until I finally came across the original study.

In July 2010, Campbell, Boustani and colleagues published the results of a 6-year longitudinal observational study on the cognitive function of 1,600 African Americans over the age of 70 and the association with medications with anticholinergic side effects.[2] The study enrolled individuals who were cognitively normal at baseline. The participants were then reevaluated at least once for cognitive decline at 3 and 6 years of follow-up. Data on patient’s medications with anticholinergic side effects were based on participants reported medication use as well as over-the-counter and prescription bottles belonging to the patients.[3]

The results of the Campbell study are as follows: of the study participants, 179 of 1,652 (11%) were deemed to be exposed to “definite” anticholinergic medications. In that group, the odds ratio for “cognitive impairment” was 1.43, which was not statistically significant to a p-value of 0.05. When corrected based on the number of drugs with anticholinergic effects an individual was taking, the odds ratio for cognitive impairment was 1.46 with a p value of .0181. However, overall the authors conclude that their data did not support the hypothesis that the use of anticholinergic medications increased the risk of alzheimer’s dementia and that the results simply “suggested” a link between this class of medications and “mild cognitive impairment”.[2]

After forty-five minutes of researching and using information databases that are only accessible to me via my medical school library, I had found that the information my friend’s original fear was based on was at best inconclusive. A study with internal validity only to African-Americans over the age of 70 which “suggested” that anticholinergic use may be linked to mild cognitive impairment had, through the evolution of information, been applied to the general population and concluded that medications like Benadryl caused memory loss.

The validity of the data as to whether or not anticholinergic medications cause memory loss is not the issue here. Instead, it is vital for clinicians to be aware of how the results of medical research can be so grossly misinterpreted and inaccurately portrayed, and thereby spread unnecessary fear and false information to the public. Though not a new issue, the portrayal of medical studies becomes increasingly important every day as un-reviewed information appears in newspapers, television and especially on the internet. Subsequently our patients, our friends and our families come to their primary care physicians looking for clarification.

The media has influenced the public’s relationship to medicine for decades. In 1992 the Journal of the American Medical Association (JAMA) published an article that associated a 39% decline in methylphenidate treatment for children with attention deficit/hyperactivity disorder (ADHD) in Baltimore, Maryland with a story on The Oprah Winfrey Show. The story and the ensuing news coverage highlighted side effects of the medication as well as local lawsuits against the medication.[4] The use of methylphenidate for ADHD in Baltimore dropped significantly below the national rate likely based on the local population’s apprehensions about it’s safety from a negative media blitz rather than scientific information.

Similarly in 2000, the New England Journal of Medicine (NEJM) studied how information on medications was portrayed in the newspaper and on television.[5] The authors found that only 60% of news stories reported benefits of drugs quantitatively.[5] Additionally, less than half mentioned harm associated with the particular medications.[5] While 82% of stories specifically cited an expert in the field or a specific scientific study, half of those had financial ties to the drug manufacturers.[5] The media is the main source of scientific and medical information for the vast majority of Americans and as such it is clear that the information being presented is inadequate. Individuals are left to rely on the interpretation of study results by journalists rather than the clinical recommendations of the various medical societies that help physicians determine appropriate medical care.

Even within the major news networks, television health coverage has major pitfalls; in one study, 60% of “health news” stories were less than a minute long and over half were less than 30 seconds.[6] Such short segments cannot be adequate to properly explain the benefits, risks and significance of new medical information. Like the article sent by my friend, many television medical stories rely on a single source for their information and do not have enough data to back up their claims.[6]

Journalists have an obligation to report accurate and relevant information to their audience. In medicine, those reports must not only be accurate but also in context—they must be well researched and ideally confirmed by medical experts or full time medical journalists. As the internet becomes an ever increasing source of information, it becomes impossible to fully regulate and verify the health information that reaches the public.

That said, what is the responsibility of the clinician who encounters a patient with questions about information they acquired from the media? In general clinicians agree that there is an obligation in the medical community to provide the most up to date and accurate information and to either confirm or correct patients’ outside information. However, as this issue continues to grow exponentially, do we also have a responsibility to educate our patients on how to scrutinize the information they receive in order to better distinguish reliable information from invalid claims? As medical professionals we have years of education on how to assess the validity of published research. We have ongoing reviews of research as it emerges. Even college graduates with a general liberal arts education may not have the background to accurately assess whether or not the study they are reading is well designed, let alone whether or not the results are significant. Where then can we advise our patients to get their medical information besides from their doctors? For now, it may be best to give our patients a general set of guidelines to look for well referenced articles and articles sponsored by the various American medical associations and colleges. Doctors cannot regulate or control the accuracy of medical information portrayed in various media outlets, but can make an effort to stay current on medical issues and take the time to clarify the information to our patients. If as clinicians we do not take the time to explain current data to our patients to the best of our ability, then their only real source of knowledge will be the easily accessible but highly suspect information on the internet.

Dr. Natalie Smith is a graduate of NYU School of Medicine

2. Campbell NL, Boustani MA, Land KA, et al. Use of anticholinergics and the risk of cognitive impairment in an african american population. Neurology. 2010;75(2):152-159.

12 comments on “Clinical Misinformation: The Case of Benadryl Causing Dementia”