What Physicians Should Know About MDMA (Ecstasy) 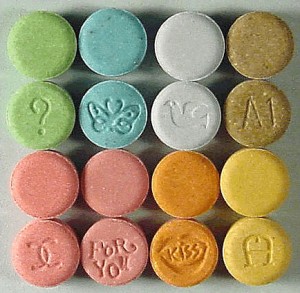 With the recent resurgence of techno music and raves in the United States, the drug MDMA, known worldwide by the name “ecstasy,” has experienced a comeback. In light of a New Year’s Eve rave in Los Angeles in 2010, where 18 MDMA-related emergency room visits and 1 death occurred, MDMA is once again becoming a problem [1]. Locally, 4 MDMA-related emergency room visits and 2 MDMA-related deaths occurred this past summer at Electric Zoo, an annual electronic music festival in New York City’s Randall’s Island. While common drugs such as alcohol, cocaine, and marijuana remain at the forefront of nightlife-related abuse, teenagers, college students, and post-graduate young adults have taken a particular liking to ecstasy. In 2010, a study showed that 10% of teens reported using ecstasy, up from 6% in 2008. Data from that study translate into approximately one million high school students using ecstasy in the past month [2]. In addition, ecstasy-related emergency department visits increased approximately 75% between 2004 and 2008 [1]. Users of MDMA describe drug-induced sensations such as increased mental stimulation, enhanced sensory perception, and increased emotional warmth and empathy towards others. Due to the drug’s stimulant properties, it also increases physical stamina and is popularly used for the purpose of extended physical exertion, such as dancing. However, as enticing as these qualities may sound to a growing number of individuals, the drug’s adverse events and possibility of death outweigh the perceived benefits. It is important for the clinician to understand the pharmacology and mechanism of MDMA in order to properly counsel and treat patients.

MDMA, short for 3,4-methylenedioxymethamphetamine, is a Schedule I drug, also known by the names “XTC,” “Molly,” “Adam,” or “E.” To date, there have been over 16 ecstasy-related compounds identified [3]. First synthesized in 1912 as an appetite suppressant, ecstasy was later “rediscovered” and used as an adjunct to psychotherapy in the late 1970s until 1985 when it became designated as an illegal Schedule I drug due to its toxicity and high abuse potential [4]. Tablets sold as ecstasy usually contain a variety of other drugs and adulterants including amphetamine, methamphetamine, caffeine, ketamine, and acetaminophen, and tablets may not even contain MDMA at all [3]. MDMA causes the release of serotonin, dopamine, and norepinephrine from the central nervous system, in addition to inhibiting their reuptake (specifically serotonin’s) [5]. These neurotransmitters have important roles in mood control, thermoregulation, control of sleep, appetite, reward, and the autonomic nervous system. It has been shown that after administering MDMA, levels of cortisol, prolactin, antidiuretic hormone, and adrenocorticotropic hormone rise [6]. The rise in prolactin may be responsible for the emotional closeness ecstasy users experience, possibly mimicking a “post-orgasmic state” [7].

MDMA has a plasma half-life of 7.6 hours; users begin to experience desired effects within 1 hour of ingestion. It is primarily metabolized by the liver and excreted in the urine. Short-term adverse events frequently occur and include paranoia, anxiety, depression, pupil dilation, increased jaw tension and teeth grinding, loss of appetite, dry mouth, tachycardia, hot and cold flushes, and sweaty palms. Once the drug wears off (within 4-6 hours), users experience a “hangover” that can last up to 5 days, which includes anxiety, restlessness, irritability, sleep disturbances, and depression [8]. This hangover is likely due to the temporary reduction of serotonin, norepinephrine, and dopamine within the central nervous system. In addition to hangover, MDMA can produce other serious and potentially lethal side effects.

The risk of death for first-time users has been estimated to be between 1 in 2000 to 1 in 50,000 [9]. The most common causes of ecstasy-related death are hyperthermia, serotonin syndrome, and hyponatremia. Less frequent causes of death occur secondary to cardiac arrhythmias, disseminated intravascular coagulation, convulsions, and intracranial hemorrhage [4].

The syndrome of hyperthermia with rhabdomyolysis and multi-organ failure is well described in the literature. Both serotonin and dopamine are involved in central control of thermoregulation, and MDMA’s effects lead to the activation of mechanisms that conserve and produce heat. Many cases of hyperthermia do not result directly from toxic insult of MDMA and are instead associated with excessive exertion (such as dancing) combined with inadequate fluid replacement [10]. The users who dance all night in a warm environment (such as a crowded rave) predispose themselves to the development of exertional hyperthermia. Interestingly, the blood levels of MDMA found in those who suffer from hyperthermia vary drastically, leading to the notion that the hyperthermia-related effects of MDMA are not necessarily dose-dependent, but are more likely related to the circumstances in which the drug is taken.

Many ecstasy users have learned that not drinking enough water while on ecstasy can lead to hyperthermia, and therefore drink excessively large volumes to prevent dehydration. Clubs have been known to encourage hydration, providing “chill-out” areas with free drinking water available. This education and encouragement has led to more ecstasy-related deaths due to dilutional hyponatremia and consequential cerebral edema [14]. In addition, MDMA has been shown to promote ADH release in humans, compounding the hyponatremia initiated by excessive water intake in the context of volume depletion caused by excessive exertion [6].

Liver failure has also been reported in association with MDMA use, but generally occurs in the picture of multi-organ failure caused by hyperthermia. However, episodes of isolated liver failure have occurred and histologically resemble acute cholestatic hepatitis. Studies have found eosinophils and histiocytes within the liver tissue, suggesting a hypersensitivity reaction [15].

Tolerance develops with chronic use of MDMA, where the positive effects diminish over time and the negative effects increase. Long-term use leads to memory and higher cognitive deficits, including problems with executive processing, logical reasoning, problem solving, and emotional intelligence. Chronic use of MDMA leads to significant serotonergic reductions in the cerebral cortex and, as a neuroadaptive response, higher receptor binding potential. Using electroencephalographic and neuroimaging studies, these serotonergic reductions have been associated with poor cognitive performance. It has even been suggested that light MDMA users may have dysfunctional inhibitory circuits in their hippocampus [16].

Overall, it is clear that serious acute illness and death are potential adverse events of MDMA. Some users will argue that they use MDMA because they believe it to be safer than other street drugs, such as heroin and cocaine. This is not the case. Despite the popular belief that certain forms of ecstasy such as “molly” (short for “molecule”) are purified and therefore safe, there is no formal regulation of the drug and users never know what exactly they are getting. In 2013 alone, 59% of pills sold as ecstasy, tested by the Ecstasy Data Project, did not even contain MDMA [17]. Although life-threatening adverse events are less frequent than with other street drugs, they still occur unpredictably. With 11% of the population on antidepressants, the concurrent use of MDMA in these patients can lead to severe and life-threatening serotonin syndrome. As clinicians, we have a responsibility to know this information and counsel our patients accordingly.

2 comments on “What Physicians Should Know About MDMA (Ecstasy)”