To Inject, or Not to Inject: Using the Pneumococcal Vaccinations Effectively 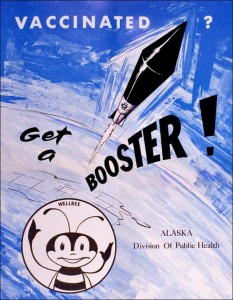 Efforts to vaccinate against this gram-positive diplococcus started in mining sites near Johannesburg, South Africa around the turn of the last century [2]. At that time, pneumonia was rampant in the increasingly cramped and squalid living conditions of the African laborers. The infection rate was 1 in 10 with a 25% case fatality rate [2]. Sir Almroth Wright, recently knighted for his work in developing the typhoid vaccination, turned his attention to this public health issue. He studied 50,000 miners, half of whom he injected with heat-killed S. pneumoniae. Results, however, were disappointing. Decreased attack rates were observed only in the 4 months after intervention, and there was no mortality reduction [2].

Since that first attempt in Africa, several important lessons have been learned about S. pneumoniae and its variability to guide effective immunization. First, antibodies against the bacteria’s polysaccharide capsule are the mediators of immunity [2]. Second, the protection conferred via vaccination is serotype specific, meaning antibodies only develop and protect against those serotypes present in a specific innoculum, leaving patients vulnerable to all of the other approximately 90 known serotypes [3]. Based on these two principles, effective vaccinations have been designed and are currently in use today.

Pneumovax 23, a 23 valent purified polysaccharide vaccine (PPSV23), was released on the US market in 1983 [2]. The vaccination consists of purified capsular polysaccharide antigens from the 23 most common pneumococcus serotypes that account for approximately 85-90 percent of the invasive disease burden [2]. A 2013 Cochrane meta-analysis combined 18 randomized trials investigating the efficacy of PPSV23 [4]. The meta-analysis determined that PPSV23 significantly reduced invasive pneumococcal disease (odds ratio [OR] 0.26, 95% CI 0.14-0.45). Best protection was determined in patients in low-income countries living in poor sanitation and overcrowded conditions, as well as among the elderly in developed nations. There were also reductions in the incidence of S. pneumoniae bacteremia (OR 0.26, 95% CI 0.15-0.46) and pneumonia (OR 0.46, 95% CI 0.25-0.84) [4].

Current indications for the PPSV23 are based on age and risk of pneumococcal disease. Because mortality from S. pneumoniae increases sharply after age 65, the Advisory Committee on Immunization Practices (ACIP) recommends universal vaccination at this age or older [5]. ACIP also recommends vaccination with PPSV23 for individuals between ages 19-64 with increased risk of invasive disease. This list includes patients with anatomic or functional asplenism, such as those with auto-infarction from sickle cell disease or other hemoglobinopathy. Other patient subsets that should be vaccinated include immunocompromised individuals, like those with HIV, hematologic malignancies, solid organ transplants, iatrogenic immune suppression, chronic lung disease, diabetes mellitus, chronic liver disease, and chronic renal disease including nephrotic disease. Also included are patients with congestive heart failure, cerebrospinal fluid leak, cochlear implants, alcoholism, and cigarette smoking who are more susceptible to S. pneumoniae-related otitis media, meningitis, and of course, pneumonia. [5].

After PPSV23 vaccination, serum antibodies peak and then steadily fall over the next 5-10 years, with immunity lasting 5-6 years [1,6]. If vaccinated before 65 years old, the ACIP recommends revaccination once after 65, maintaining 5 years between vaccinations [5]. Currently, multiple vaccinations are not recommended because of insufficient data regarding clinical benefit [1]. Also, revaccination with polysaccharide antigen may potentially induce hypo-responsiveness—the immune reaction to the second dose is less robust and may blunt antibody immunity to pneumococcus [1,3,10].

Because infancy and normal childhood are the periods of human life when the incidence of pneumococcal infections is highest, attempts at vaccination of children began in the late 1940s [2]. Initial attempts to vaccinate children with purified capsular proteins were unsuccessful, however, prompting strategies to circumvent immunization failure secondary to immune system immaturity. In the late 1990s, Prevnar 7 was introduced to the US market; it covalently attached the capsular polysaccharide to the highly immunogenic modified diphtheria toxin protein [1]. The result was a more robust immune response that proved effective in children [7]. Coverage was later expanded by 6 serotypes for the development of Prevnar 13, a 13-valent pneumococcal conjugate vaccine (PCV13) [8]. The vaccination was approved for universal use in children to protect against the 13 most common disease-causing S. pneumoniae serotypes in this population [7]. Twelve of the serotypes in PCV13 are also included in the PPSV23 vaccination, serotype 8 is covered by PPSV23 but not PCV13, serotype 6A is covered by PCV13 but not PPSV 23 [5,3].

In 2012, the ACIP recommended the use of PCV13 for specific adult patients, given the vaccination’s vigorous and long-lasting immune response [9]. PPSV23 provides T-cell independent antigens that produce IgG antibodies but have limited immune memory. The stronger immune activation by PCV13 provides T-cell stimulation resulting in higher titers of IgG, memory cell activation, and IgA antibodies that protect mucosal surfaces [9,10]. Studies comparing IgG levels after PCV and PPSV administration have shown much higher titer levels after PCV injection [9,10,11]. However, the necessary titer levels to protect against pneumonia and other pneumococcal disease are currently debated and have not been determined [9].

In adults, the ACIP recommends PCV13 in addition to PPSV23 in those with asplenism, with immune compromise, or at risk of invasive infections [9]. Basically, with the exception of smokers and patients with chronic liver disease, diabetes, or heart failure; those indicated for Pneumovax 23 before 65 years of age are also indicated for PCV13. The ACIP does not recommend universal vaccination with PCV13 in the elderly [5].

In terms of administration, PPSV23 and PCV13 should be given at different times to avoid possible interaction between the formation of antibodies and the introduction of exogenous antigens. The ACIP recommends giving PCV13 first, followed by PPSV23 at least 8 weeks later [5]. If the patient has already received PPSV23, then PCV13 should be given at least 1 year later [5,8].

There remain several areas of uncertainty with regards to S. pneumoniae vaccination. Although PCV13 protection is presumed to last longer than PPSV23 given the more robust T-cell response, the duration of protection is unknown [6,8]. Despite this uncertainty, there are currently no indications for revaccination with PCV13 [5]. There are also no recommendations for vaccination of patients after S. pneumoniae infections, although consensus suggests that these patients should be vaccinated as they have demonstrated susceptibility to S. pneumoniae [5,12].

In summary, pneumococcal vaccination has been determined to be effective in reduction of pneumococcal disease burden and hospitalization in specific populations [4]. When deciding how and when to provide S. pneumoniae protection, consideration should be given to age and comorbidities to determine whether a patient is indicated for PPSV23 alone or in combination with PCV13.

7. Seale A, Finn A. What is the best way to use conjugate vaccines? Current Opinions in Infectious Disease 24; 219-224. 2011. http://www.ncbi.nlm.nih.gov/pubmed/?term=eale+A%2C+Finn+A.+What+is+the+best+way+to+use+conjugate+vaccines%3F+Current+Opinions+in+Infectious+Disease

One comment on “To Inject, or Not to Inject: Using the Pneumococcal Vaccinations Effectively”