Do Appearances Really Matter? Examining the Role of the White Coat in Medicine Today 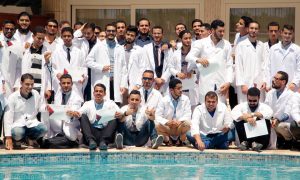 Prior to the 20th century, physicians’ attire was black, a color associated with formality, since patient-physician interactions were considered serious, formal matters. As the 19th century ended and medicine evolved from home remedies and “quackery” to the field of bioscience, values of cleanliness and antisepsis were emphasized. These were reflected in a change of physicians’ attire from black to white to highlight the “pureness” of medicine. Since this time, the white coat has been regarded as a symbol of medicine and an integral part of the physician’s image.1

As a medical student, prior to starting my rotations, I was initially very eager to wear my white coat and integrate myself as a member of the clinical team. However, on my first rotation, Psychiatry, we were instructed not to wear our white coats as it can be anxiety-provoking and intimidating for patients. On my second rotation, Pediatrics, I finally took out my pristine coat; to my surprise, my fellow medical students and I were often the only members of the medical team to wear our white coats, barring the occasional attending physician. I was told the white coat can be frightening to children; therefore, none of the residents wore their white coats. On my current Medicine rotation, I have noticed that most physicians wear their white coats in the hospitals, but wear them less frequently in the outpatient setting.

An article on physicians’ appearance by Kazory noted that the popularity of the white coat has decreased over the past several decades, with over 70% of hospital doctors and medical students wearing their white coats in 1991, and only 13% of physicians choosing to wear them in 2004. Among the reasons for the decreased use of the white coat were interference with the physician-patient relationship, risk of spreading infections, and discomfort.2

One study examining patient opinions toward physician attire in an OB/GYN clinic showed that the majority of patients had no preference for their physician wearing a white coat, reporting no effect on comfort with or confidence in their physician. However, when examining a series of photographs showing a variety of physician clothing styles, patients expressed greater comfort and trust with images of doctors wearing scrubs and a white coat, as opposed to business attire, casual attire, or scrubs without a white coat.3 In contrast, a study including 202 inpatients and 249 outpatients showed that the majority of patients were more comfortable with doctors dressed in semiformal clothing than with formal attire and a white coat. The preferences differed by age, with older patients disliking semiformal attire and preferring physicians wearing white coats. Similar to other reports, the least popular physician attire was “casual dress.”4 Another study examining inpatients and doctors showed that 56% of patients versus 24% of doctors preferred physicians to wear white coats. Similar to the previous study, these results also varied based on age. Some of the most common patient reasons were that white coats provided easy identification and a more professional look. Additionally, 6.5% of patients thought white coats help prevent the spread of infection, while 70% of the physicians believed that white coats transmit hospital-acquired infections.5

There have been several studies examining the role of white coats in the spread of infection. Since 1969, over 40 studies have addressed this issue, many of which concluded that doctor apparel is frequently contaminated.6 A well-known 1991 study conducted by Wong and colleagues cultured samples from the cuffs, lower front pockets, and backs of white coats from 100 doctors in different specialties and hospitals. They found colony-forming units composed mostly of skin commensals, but frequently of penicillin-resistant Staphylococcus aureus species.7 A more recent cross-sectional study cultured the lapels, pockets, and cuffs of 149 grand rounds attendees at a large teaching hospital, and found that 23% were contaminated with S aureus, of which 18% were methicillin-resistant.8

While there is an abundance of evidence suggesting that white coats and other apparel are frequently contaminated with pathogenic and drug-resistant microbes, there is less evidence directly linking this contamination to infection and outbreaks.9 That being said, there is evidence demonstrating that certain pathogens are easily transferred from fabrics to hands and fingertips,10,11 and that the use of gowns and gloves together lowers the incidence of vancomycin-resistant Enterococcus infection.12 Additionally, there have been a few documented cases of healthcare worker apparel leading to infection. Notable among these are a 2011 Bacillus cereus bacteremia outbreak in Japan linked to contaminated hospital linens, and an instance in 2012 where three postoperative Gordonia bronchialis infections were linked to a nurse anesthetist’s scrubs.13,14

In summary, there have been numerous studies looking at patient preferences on physician appearance, many showing that attire does play some role in patients’ comfort with and trust in their doctors.3,15 The general preference is for professional attire, which for some patients includes wearing a white coat; however, in many of these studies, only a slight majority of patients expressed a preference for the white coat.3,5,16 Since this was a preference particularly in the older generation, whereas a majority of the younger patients showed no preference for physicians wearing white coats, it would be interesting to see whether patient partialities change as the population continues to age. With regard to physician opinions, there has already been a decrease in the popularity of wearing white coats. Moreover, there have been many studies showing that physicians’ white coats are frequently contaminated with bacteria. While there is no conclusive evidence linking white coat contamination with the spread of infection, it is certainly possible. In conclusion, while there are numerous arguments for and against the use of the white coat, there are indications that the white coat, once an integral component of the physician image, may become obsolete.

One comment on “Do Appearances Really Matter? Examining the Role of the White Coat in Medicine Today”