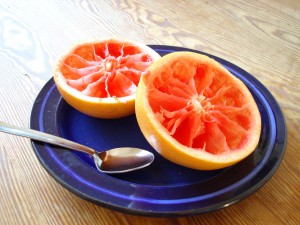 Griffith Hughes was the first to describe the grapefruit in 1750, naming it the “forbidden fruit” of Barbados for unknown reasons. Centuries later, it seems as if he may have been on to something, as grapefruit juice (GFJ) has been shown potentially to interact dangerously with a list of commonly prescribed medications. This list has steadily grown to include over 85 drugs.1 Meanwhile, the Internet is rife with anecdotes of near-death experiences attributed to drug interactions with the much-maligned fruit. The power of this information is real. Staring at a 56% 10-year risk of a heart attack or stroke, a patient of mine refused to start a statin out of loyalty to his morning cup of fresh-squeeze GFJ, having heard that it “don’t mix well with a statin.” The pleas of a medical student fell on the deaf ears of a 77-year-old man, determined to ride out the rest of his days with his cane in one hand and some fresh squeeze in the other. Ironically, the statin was too bitter a pill to swallow.

Unbiased by the long rap sheet of this once forbidden fruit, I decided to confront the literature myself. The grapefruit-drug interaction was first discovered serendipitously. Researchers designed a study to determine the impact of ethanol on the vasodilatory effects of the calcium channel blocker felodipine. The researchers scoured their fridge to discover that GFJ was the best vehicle with which to mask the taste of ethanol, insofar as to allow for a blinded, placebo-controlled study. To their surprise, they found that co-ingestion of GFJ raised the plasma levels of felodipine five-fold, increasing rates of orthostatic hypotension.2 Felodipine was known to be metabolized to an inactive state by the cytochrome P450 3A4 (CYP3A4) enzyme in enterocytes, suggesting that GFJ might inhibit this process. Indeed, colonic mucosa biopsies taken from patients who drank a glass of GFJ with each meal for six days showed a significant reduction in CYP3A4 protein levels.3 This effect was later identified to occur within as little as four hours after a drink.4 As proof of principle, a furanocoumarin compound was identified as the component of GFJ responsible for CYP3A4 inhibition.5 Biochemical separation of this compound from GFJ reversed its affect on felodipine, leaving us all with the intriguing dilemma of choosing between “no pulp” and “no furanocoumarin” grapefruit juice on our future trips down the grocery aisle.

While felodipine has served as a tool to study GFJ’s affect on drug bioavailability, the list of drugs affected by GFJ is long, and includes commonly prescribed medications such as statins, opiates, and clopidogrel, among many others.1 In fact, labels for drugs like atorvastatin and simvastatin warn against an increased risk of rhabdomyolysis when taken with GFJ. Though the validity of this pharmacologic interaction is without question, the public perception that GFJ and statins “don’t mix” is grossly exaggerated, influenced by early studies showing that GFJ consumption led to a 13.5-fold increase in simvastatin exposure.6 Yet, this study was performed in patients who ate the equivalent of a whopping six grapefruits per day. Later studies using a more “physiologic dose” of one glass of GFJ per day reported a 3.6-fold increase in lovastatin exposure,7 which lowers to only 1.9-fold if the juice is taken in the morning and the statin in the evening.8 As highlighted in an example by Lee and colleagues, a daily dose of 40 mg of simvastatin for your typical 60-year-old patient translates to a 61% reduction in his or her lifetime risk of developing ischemic heart disease.9 In this case, the benefit far outweighs the risk. Consumption of one daily glass of GFJ with simvastatin increases the rate of rhabdomyolysis by roughly 1-2 per 100,000 person-years.9 Moreover, rosuvastatin and pravastatin sidestep the issue entirely, as they are metabolized via a different cytochrome.

While research on GFJ has been exaggerated enough to scare patients away from life-prolonging statins, it has equally been manipulated by the weight-loss industry to promote the notion that GFJ can prolong the half-life of caffeine. This idea was first popularized by The Four Hour Body, a book that suggested a morning cup of GFJ with coffee would enhance its affect on basal metabolic rate, leading to rapid weight loss and even “incredible sex.” This idea is based on a 1993 study demonstrating a 31% increase in caffeine half-life in participants who drank 1.2 liters of GFJ per day, which was attributed to inhibition of cytochrome CYP1A2.10 However, attempts to reproduce this result with “physiological” doses of GFJ have failed to show any such association.11

While popular misconceptions of grapefruit abound, its positive attributes should not be overlooked. GFJ is low in calories and rich in vitamins, minerals and anti-oxidants. Among its more recently discovered attributes, it has been shown to increase insulin sensitivity and decrease fasting blood glucose in mice,12 and its effect on the cytochrome P450 system has been shown to enhance the pharmacokinetic profile and efficacy of anti-cancer medications.13 Armed with this kind of data, a brighter future lies ahead for this once forbidden, now misunderstood fruit.